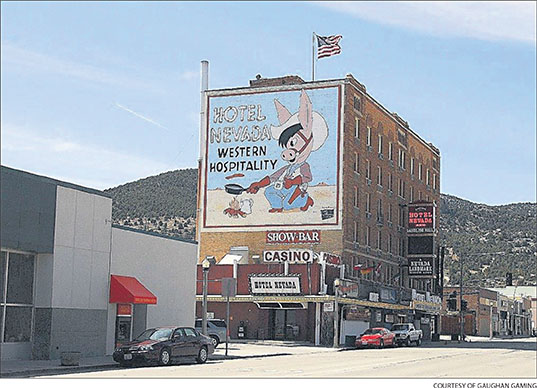 WHEN IT WAS CONSTRUCTED IN 1929, THE HOTEL NEVADA WAS THE TALLEST STRUCTURE IN NEVADA.

The recently completed renovations to Hotel Nevada in Ely are part of Gaughan Gaming’s overall strategy to re-invest in Ely as the small town in eastern Nevada is poised for growth.

Rick Richards, general manager of Hotel Nevada, says Gaughan Gaming of Las Vegas purchased the hotel — once the tallest building in Nevada — five months ago to increase its portfolio of properties in the town. Gaughan Gaming also owns the Postal Palace, a Mexican restaurant, the Four Sevens, Fireside and Grand motels and a vacant parcel of land within town limits.

Ely already houses many people who work at Ely State Prison, the Robinson copper mine and the Spring Valley wind farm. Richards says development of Midway Gold’s Pan mine and others will boost the town’s population and demand for housing, food and entertainment.

“We really are reinvesting in Ely; we think it is go to grow,” Richards says. “By this time next year, there will be five mines fully operating. Ely will grow from a business and population standpoint, and we want to reinvest in what we have and make sure everything is upgraded and modern.”

Upgrades at Hotel Nevada were simple by most renovation standards — new flooring and furnishings in the lobby, new slots on the casino floor, new paint, furnishings and flat-screen televisions in the hotel’s 67 rooms — but installing everything was no walk in the park.

Hotel Nevada is built entirely of concrete, so no new wiring or mechanical work could be buried inside walls or ceilings. Rooms lacked convenient power outlets for guests to plug in computer or cell phone chargers, so cords had to be “artfully” installed.

NEW LOBBY FURNISHINGS ARE AMONG FEATURES OF THE RENOVATED HOTEL NEVADA, A 67-ROOM PROPERTY IN ELY.

“We had to cover it up as much as possible,” Richards says. “We were not able to go into the walls, so the challenge was to hide it in a cool way.”

Another challenge: adding modern amenities while keeping in tune with the hotel’s rustic charm. Gaughan Gaming used old photographs and the counsel of a local historian to make sure door and wall casings, sinks and coat racks all had the look and feel of 1920s- and 1930s-era furnishings.

Richards says Gaughan Gaming continues to evaluate new purchases in Ely. “We are very selective in the properties we look at, and we also are looking at other (acquisitions),” Richards says.