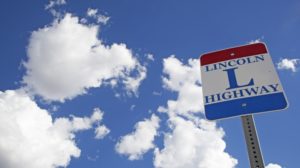 To kick off my 28th birthday right, I had one particular getaway in mind. Get out of town for a few days, soak in some hot springs, enjoy the serenity of rural Nevada, and set myself up with some one-of-a-kind holiday spirit on Ely’s Polar Express train. Starting at home base in Reno, my husband and I made our way east on The Loneliest Road in America…which, in my opinion, is the only way anyone should ever travel central Nevada.

Just a smidge jittery about trekking what many would consider to be a road less traveled in the winter months, I was totally soothed to find out that the Lincoln Highway is an American Defense Highway, meaning it was sure to be clear and open round the clock. Phew. Taking our time on the way out there, the temperature continued to plummet the more we dove deeper into the rurals. Hitting a few favorites like Spencer Hot Springs, the tone for the trip was set in the most awesome of ways—the Big Smoky Valley gets me relaxed and happy unlike any other place on this planet. So far 28 was looking pretty flipping good.

As a lavish little tidbit, I decided to treat myself to a night at a Nevada icon I hadn’t had the pleasure in staying yet: The Hotel Nevada. Because why not? Peeling into Ely about an hour before our departure to the North Pole, we lugged our bags into this mega-historic abode and instantly I became infatuated with everything in sight. This undeniably interesting hotel spread its roots all the way back in 1920s, and with an obvious Wild West sort of vibe going on, it was somehow perfectly complimented with unavoidable opulence. It was kind of like Jesse James attending teatime at Buckingham Palace…cowboy chic as my husband playfully joked. A slew of notable celebs like Wayne Newton have stayed here over the decades, and by the time we made our way to our 6th floor room [it took a few minutes, as the elevator was original!] I was pumped to see we were in the Ingrid Bergman-themed room. First we’re on the top floor of an ultra cool historic building—still the tallest in Ely today—and we’re in the queen of Casablanca’s digs?! Big time bonus. 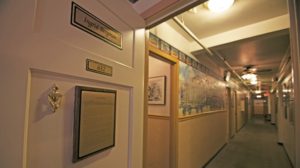 Taking a minute to appreciate this finely decorated Planet Hollywood-esque room, we slinked into appropriate Polar Express attire, and in true holiday spirit, we didn’t stop with your regular ol’ jammies either. In my newly defined, mature 28 year-old state, I opted for long johns bedazzled with lap dogs wearing party hats with glitter…lots of glitter, and my 30 year-old co-pilot willingly chose to dress in an Elmer Fudd getup. You know, the red body suit with a button-up trouser area? Yep. This. Was. Happening. I realized we were going to be passengers on a train designed for children, and hey, maybe we’d had a few too many candy canes, but we were totally into all this.

Cinnamon and peppermint-flavored goodness in our gullets, we robed up in heavy down jackets and scarves that turned us into waddling Michelin Men and set off toward the Nevada Northern Railway, totally ready to rip that Band-Aid off of our first Polar Express experience. While I was newly 28, I most definitely was not out of touch with the magical qualities this book bestowed that I so very distinctly recalled being read 20 years earlier. Chugging along, my own breath puffed out in front of me like my own mini-locomotive. With dusk upon us, the temperatures were super low, the dew point was high, and before long I realized it was truly colder in Ely than it was in the actual North Pole. Talk about setting a scene. 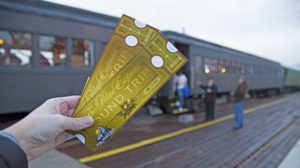 Tickets in hand, two train conductors appeared and charismatically greeted us, just as jovial you’d imagine. One giant gallump of a step later and we were on board, drinking in one of the most authentic, picture-perfect Polar Express locomotives in the nation. Although it was technically just before Thanksgiving, it didn’t matter—freezing cold temperatures, beaming kids all around and irresistible Christmas tunes, and a few amazingly decorated train cars catapulted us into the Christmas spirit as we slinked down into our seats by a roaring pellet stove on board.
Before long the conductor reappeared exclaiming “And do YOU believe in Santa??”
As the very first seated passenger he encountered and children surrounding me hanging on every word, I blurted, “Why yes, of course I believe in Santa!!!” The conductor retorted, “Good! Because you’re on the Pooooolllllaaaarrrrr Expressssssss!!!” And just like that, we were barreling along, in hot pursuit of this legendary arctic land. 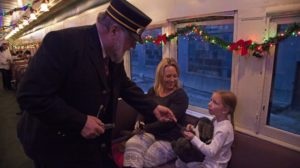 The train car was abuzz with excitement, and even we—two full decades older than these kids—were totally giddy with delight over with the warm chocolate chip cookies, silky hot cocoa, glimmering Christmas lights and irresistible holiday spirit. While the bouncing staff tried to push each passenger further down the holiday rabbit hole by singing Christmas tunes, nobody—I mean no one, myself included—could peel my eyes away from that window. I wanted to see the North Pole, and I reeeealllllyyyy wanted to see Santa. Maybe we were in a sugar coma, but as we chugged along, Ely’s twinkling lights below, along with the gentle rock of the Nevada Northern Railway lulled me into a magical little nest of comfort. 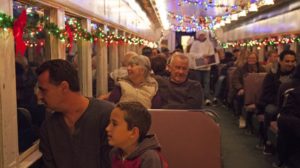 It wasn’t long before both conductors appeared, shouting “We’ve made it! We’ve made it to the North Pole!!!” With this mega ton beast creaking to a stop, we peered through the window to see a bouncing red suit guffawing with some serious purpose. Departing from the Toy Factory and Candy Barn, Santa hopped aboard, and while I was so totally enamored with this attention grabbing man, the real magic was all around me. Watching each kid lose it with delight was something I had forgotten about…probably because I don’t have any children of my own and am simply not around kids too often. 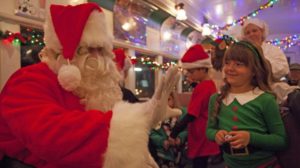 Making his way in and out of each car paying an exclusive visit to each child, he wasn’t just blowing the mind of the kid who was bouncing on his knee…but instead single handedly commanded the attention of every person on the train. Myself included. You remember waiting to see Santa, or feverishly penning your holiday wish list as a kid, but to see every kid just completely losing their minds in delight was an awesome reminder of what true holiday spirit looks like. I have no doubt that this sounds corny, but this whole thing was a game changer. Even though I haven’t made it to 30 and wouldn’t call myself a wise old owl by any means, you can’t deny that it happens to all of us: you get busy, grow up and get lost in the routine. Get gifts, wrap gifts, give gifts. This was a brazen reminder to maybe slow down a bit and live in the joy of these things…they really do only come once a year. Just have a little fun and let go, you know? If these kids could be THIS happy over something like this, what the heck has happened to me? Slooooow it down Martinez, enjoy the little things. And that’s exactly what I did. You would have to be a robot to not feel the love on these train cars, I mean even the ill-tempered Grinch would sprout a black little heart after this. The Polar Express experience set the stage for the holiday spirit with the usuals…music, decorations, excitement. But the genuine, unavoidable, contagious emotion that unfolded in front of me? That, I did not anticipate. As I watched each kid bashfully request their most desired trinkets from their annual hero and blissfully skip off to their parents, that was the secret in the sauce. It was the purest, most innocent form of joy…the charisma, the enchantment, the jazz. If that didn’t slingshot you into the spirit, I just don’t even know if I want to be friends with you.

Getting into crunch time, Santa was going to be burning the midnight oil at the Toy Factory and had to get back to pitch in. Once again, we were headed toward Ely, and like someone had flicked a light on, the car was boisterous and disorderly with merriment. While the staff had attempted to lead us in Christmas carols en route to the holiday winter wonderland, no one really got into it. But now? This was a different story. People didn’t really know all the words—espcially me, but no one cared. Honestly, who can remember the eight maids a milking and seven swans a swimming song? There are a bazillion verses! New found holiday spirit in tow, we gave it our best and chugged back to the train station.
We were at the end of the track, but didn’t head for the hills without the first gift of Christmas! Complete with impeccably ringing Polar Express bells, the conductor and the rest of the staff passed these out to each person. And boy oh boy, I don’t think I’ve ever seen my husband so flipping happy…it was like we were 10 years old again, and all it took was a 90 minute train ride and a jingle bell.

Before deboarding this incredible little trek, I had one photo op in mind: posing with Anthony DeBellis, train master extraordinaire. As a former roommate of mine for the night while staying in the Bunkhouse, I felt overwhelmingly compelled to take a picture with him, but under one condition: I needed that sweet little conductor hat atop my noggin. Bam. That bucket list is just dwindling by the day, friends! 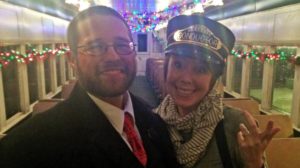 While it was a positively brisk winter day in Ely, there weren’t really any storms in sight prior to boarding. But, with one foot on the platform, I was surrounded by the biggest, most billowy flakes I’d seen in years…something that truly felt like a product of the magic of this train. To have it be colder in Ely than in the actual Polar Express, see kids go bonkers with delight, and now stand in the heart of the type of snowstorm you only see in the movies? Talk about some holiday magic, friends. I can’t imagine ringing in my 28th year any differently, and truly can’t think of any better way to bring on the holiday season.