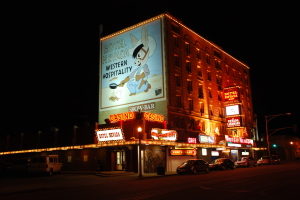 When the votes were counted and Ely was revealed as the first winner of the Tour Around Nevada 2015, no one in the Nevada Magazine office was surprised. Not only did Ely take honors in our 2010 Tour Around Nevada campaign, but in April 2014, Ely played host to the annual Rural Roundup tourism conference which many of us attended. This small eastern Nevada town pulled out all the stops to show attendees just how beautiful, charming, and diverse it was.

Ely sprang to life in 1870, not as a mining town, but as a stagecoach stop and post office along the Pony Express’ Central Overland Route. The town was designated the White Pine County seat in 1887 and supported surrounding mining camps such as Cherry Creek and Osceola. But Ely’s real development was a result of its own mining; in 1906, copper mining took hold and the population boomed as the state’s gold mines were beginning to fade, driving hungry miners to White Pine County’s new bounty. The boom led to the construction of the Nevada Northern Railway (NNRY), which connected Ely’s copper mines to the Southern Pacific Railroad.

More than a century later, the railroad is still an essential part of the community—today it serves tourists instead of miners. In addition to scheduled events and tours of the railroad grounds, NNRY offers specialty rides such as January’s Fireworks Express, October’s Haunted Ghost Train, and the incredibly popular holiday-themed Polar Express. There are numerous other ways to experience the century-old rail cars, such as taking a turn behind the throttle of a steam or diesel locomotive, or stargazing with rangers from nearby Great Basin National Park.

Another reason locals are so proud of their town is the Renaissance Village. This collection of historic buildings reflects the various cultures upon which Ely was built, with such buildings as the Asian House, the Greek House, Spanish House, etc. The village is open Saturdays, June through September, and acts as a cultural trip back in time. This year’s annual Wine Walk is July 25, and guests can purchase local artisan crafts and sample ethnic cuisines at each of the houses before a no-host dinner. The White Pine Public Museum features a model of one of the 12,000-year-old “Cave Bears” found in the area in 1982, along with American Indian artifacts, a historic doll collection, and a cell from the former Ely City Jail. The museum hours are noon-4:30 p.m., Tuesday through Saturday, during the winter.

Driving into downtown Ely from Interstate 50, heading east, can make even the non-history buff’s jaw drop. By the time your head stops spinning from all the 1900s architecture, you’ve probably reached the historic Hotel Nevada & Gambling Hall. Once the tallest building in Nevada, the Hotel Nevada opened in 1929 and still exudes the feeling of the rural west. For blocks, the early 1900s construction is engaging enough, but in 1999, the Ely Renaissance Society commissioned murals be painted on buildings around town. Along with sculptures, they tell the story of the city’s ethnic heritage and culture in a really big way. Today, the Art Walk covers 11 blocks and 29 pieces of art that pay homage to the theme, “Where the World Met and Became One.”

The geography of the area plays no small part in the fervor Ely lovers have for the town. Nestled by the Egan and Schell Creek mountain ranges, Ely is an outdoor paradise for hunters, sportsmen, and nature lovers. According to hookandbullet.com, there are about 338 ponds, lakes, streams, rivers, and reservoirs within 12 miles of Ely, giving ample places to fish and recreate to your water-loving heart’s content. Elk are prolific in the area; so much so there’s an elk viewing station just 11 miles south of Ely, complete with shaded viewing areas, charcoal barbecue stands, and informational signage. 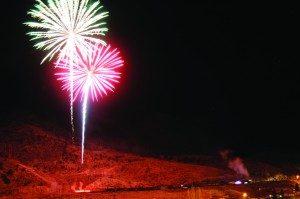 Need more reasons to visit Ely? Consider some of the comments that came with the votes:
“I have always liked Ely. Maybe because it is off the beaten path and not on an interstate, or because it is surrounded by elk country.” – Brian Iverson

“I want to vote for my hometown of Ely…(back in 1938)…great people, attractions and history. From the train to the Hotel Nevada (my Dad was bellhop there).” – Gordon Horsley

“Ely is one of the most remote towns in Nevada (closest Walmart is in Elko 190 miles, one way) and has: Comins Lake, Illipah Resevoir; the McGill Pool; Garnet Hill; fishing; hunting; 18-hole golf course; camping; bowling; mountain biking; cross country skiing; ice skating; petroglyphs; pictographs; horse racing; a historic movie theater; casinos; and Success Loop. But what I love most about Ely are the God-fearing, hardworking folks.” – Paula Day