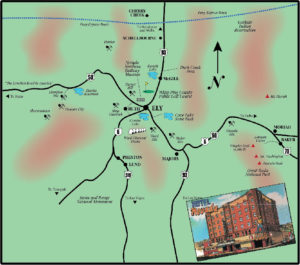 The Art Bank, run by the Ely Renaissance Society
The same organization that has installed the dozens of murals throughout Ely. Its website includes a comprehensive map with details on each of these beloved pieces of art that capture various pieces of the area’s rich history.

Nevada Northern Railway Museum
One of Ely’s greatest treasures. The museum experiences starts at a lovingly restored depot built in 1907 and includes tours and rides on the rails through Steptoe Valley throughout the year.

McGill Drugstore Museum
The year is 1979 all the time at the McGill Drugstore Museum. Museum staff keeps the premises originally built in 1908 by the Steptoe Mining Company to service its employees who live nearby. The experience includes a soda fountain and products still on the shelves.

Ward Charcoal Ovens State Historical Park
Best known for its six still standing pristine coal ovens crafted by Italian artisans around 1876 out of volcanic and latite stone, the park is a terrific place to take in the great outdoors.

The Success Loop Scenic Drive
Success Loop is a 38 mile adventure through the pristine Schell Creek Mountain range. The journey can begin at Cave Lake and take you out through McGill. Or you can drive it from McGill to Cave Lake. Either way, you will be surrounded by White Pines, stands of Aspens as wildlife while you drive through the loop and its sweeping uninterrupted views of one of Nevada’s most picturesque spots. Success Loop also includes several turnouts and campgrounds for picnicking and overnight trips.

Great Basin National Park
Great Basin National Park was added to the national park system in 1986. The park includes incredible and diverse offerings for any outdoor enthusiast. Popular attractions include Lehman Caves, Wheeler Peak and an ancient Bristlecone Pine forest. It’s also known as one of the world’s darkest places, which makes it a popular spot for stargazers.

In 2015, 704,000 acres of remote and undeveloped land near Ely became Basin & Range National Monument, Nevada’s first national monument. This area was selected because it is one of the most pristine parts of the broader Great Basin region that spans from the Sierra Nevada Mountains along the Nevada California border to the Colorado Plateau towards the east. It includes many geological wonders along with 4,000-year-old rock art. It is also home to land artist Michael Heizer’s ‘City’, an art complex that is set to open to the public in 2020.

A Monument to Outlast Humanity – The New Yorker